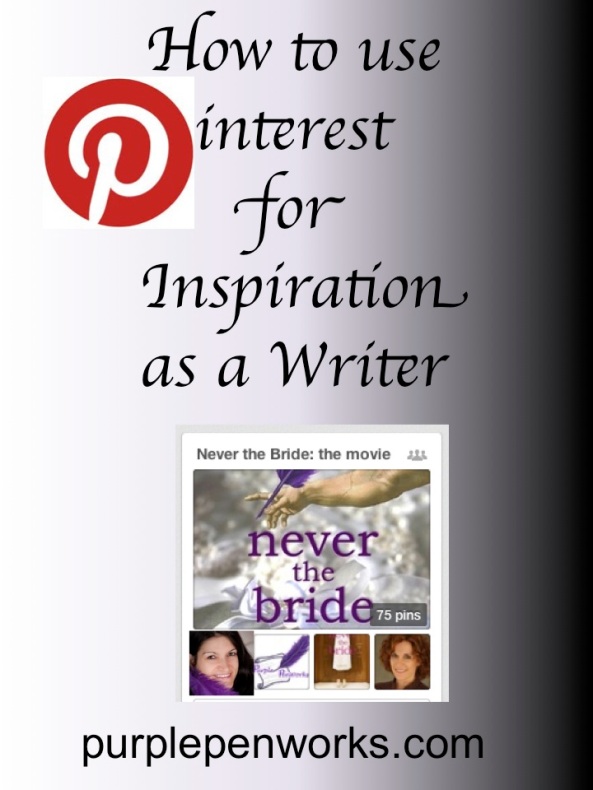 I only recently starting using Pinterest. When I first heard, “You should be on Pinterest,” I groaned. Just what I need. Another social media site to kill time on. I’m already on Facebook, Twitter (which I am NOT a fan of using), and my blogs. Why add another thing to my plate? But very quickly, it won me over. Besides the beautiful photos from all over the world, I found another use that has really helped inspire my writing.

Whenever I take on a new project, I enjoy finding pictures that go with the locations, props, costumes / wardrobe, etc of the time period or era I’m writing about. If it’s a modern day story, even just finding locations for where the movie version could shoot has been fun and helped me with descriptions.

For example, when writing my most recent romantic-comedy screenplay, Love’s a Stage, I used Pinterest to find all sorts of Thanksgiving wedding decoration ideas. I didn’t necessarily want to have a Thanksgiving wedding board on my page, so I didn’t pin them to any particular board. But as a resource, the visuals I found were very inspiring as I wrote those scenes.  I did make a colonial board for that story to go along with some of the pilgrim research in the story.

Pinterest can be especially helpful when you are researching  a particular industry or time period. I made 2 boards while working on Song of Springhill. (It’s already a screenplay but is currently in the works as a novel.) One is about the location and mining industry. The other is about the era, the 1950s.

I did a lot of Danish research for a current project, looking at Denmark, Solvang, CA, Elk Horn, IA, and everything from locations to food, outfits, and shoes. Making that board made me so excited about writing the project.

While Pinterest didn’t exist yet when I first starting writing the screenplay version of Never the Bride (or the novel), I’ve been able to use it while the script version is in development to be shot as a film, and will be able to use it for inspiration when penning its sequel, Forever the One.

A Word about using Pinterest to Market Yourself as Writer

It’s often suggested that we, as writers, make our Pinterest boards in a way that can have some appeal to others who are interested in a particular topic. Most boards shouldn’t just be dedicated to a particular book or project in a way that may not appeal to others.  So it’s suggested you choose a category for your board that has a broad appeal topically if you are hoping this board will bring awareness to you and your projects (books, movies, etc). Some projects may warrant their own board (like we chose to do with the Never the Bride board.) But the other boards, like the one for Windmill Falls or Love’s a Stage, I went with broader categories like Danish Living and All About Colonial. That way, those interested in those topics will follow the board.

For my non-fiction projects, instead of doing a board that is just for my books Finally Fearless: Journey from Panic to Peace or Finally the Bride: Finding Hope While Waiting, I chose to make boards with broader topics, like:

Remember: in using Pinterest as a writer, it’s not just about selling books or DVDs. It’s about connecting with people, your readers and viewers, and giving them something that is useful to them just by visiting your page (or your blog if your Pinterest pins also link to a particular blog like this one).

Click Here to Learn More about my Books & Movies