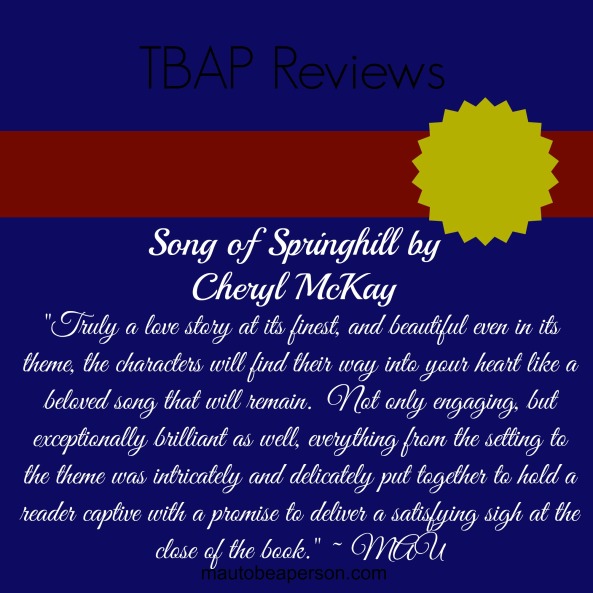 Check out the author interview on To Be A Person blog.

Here’s a new review of Song of Springhill by author Janice L. Dick. 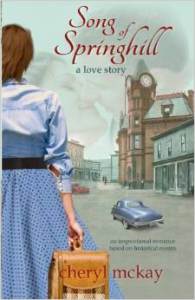 Song of Springhill is a historical romance, a work of fiction built around a true story that will touch your heart and soul. In 1956, in the town of Springhill, Nova Scotia, Canada, an explosion killed 39 coal miners. One man in particular, Charles Hugh McKay, survived because he had changed shifts with another miner. Author Cheryl McKay is the granddaughter of this man, who also survived the Bump (underground earthquake) of 1958, which killed 75 men. With her connections and encouragement from her father, Cheryl researched the Springhill Mining Disasters and wrote this novel. An accomplished author, screenwriter and producer (see my interview with Cheryl on last week’s blog), Cheryl brought together the details and formed them into a beautiful love story.

Being Canadian, I had heard of the Springhill Mining Disasters, but reading this fictionalized account brought the events close to my heart. These were real people who… 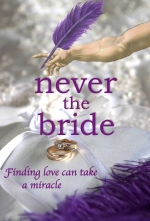 Have you ever thought about adapting your script into a novel? Have you wondered how the process of novelization works?  Rene Gutteridge and I have done a few of these together, and she’s done several with other screenwriters. We won a Carol Award / Book of the Year Award in the Women’s Fiction category of ACFW, for Never the Bride.

I also recently started adapting some of my scripts myself into novels. It’s hard work, but a very fun process. There’s definitely an art to it! It’s exactly the opposite of the process you’d go through to adapt a book into a screenplay (like I did with The Ultimate Gift). And getting your scripts out there as books just might help you get a movie made! And for novelists, you could find some good projects to work on that are about half the work of writing a novel from scratch.

On this blog, I’d like to show you one example from my screenplay Never the Bride. To follow are the first two pages of the screenplay: 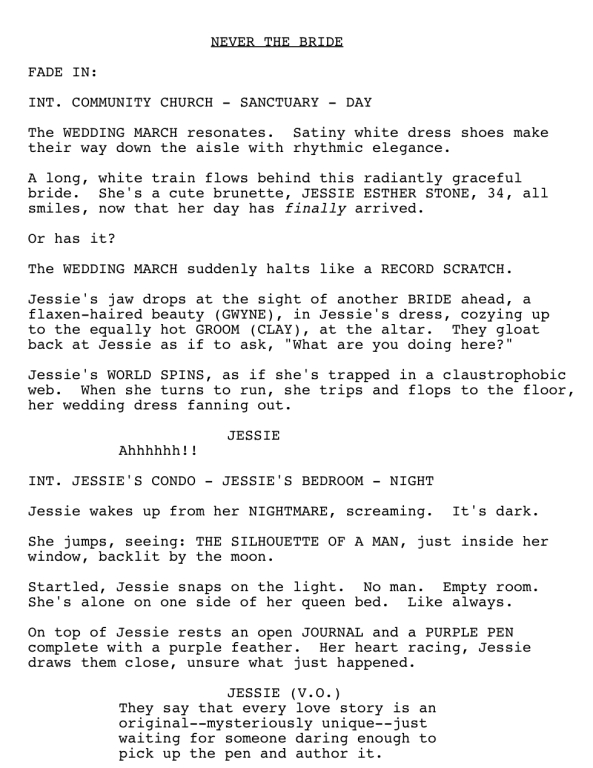 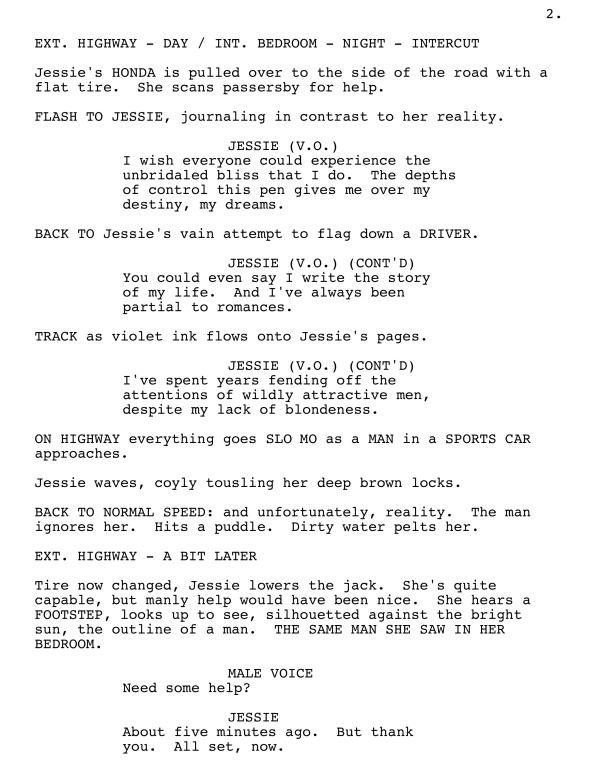 Now, before continuing to read this blog, go to your favorite book retailer and use the LOOK INSIDE or PREVIEW feature to read the first part of the novel from the opening to the point where Jessie drives off with her tire changed. (If you hop on a paperback version, you’re looking at pg. 1 through top of pg. 5.) The following link goes to Amazon’s Paperback or Google Books:

Never the Bride Sample on Amazon

The sample included 1188 words, four printed novel pages vs. 472 words and two script pages. That’s two and a half times more words that were put into the novel to describe the same sequence.

This novel is in first-person, present tense, which gives us an active thought life from which to play. It’s like getting to write one long monologue as Jessie tells her own story.

For this blog, we’re going to focus on interior monologue (the subject of Chapter Six of our new “How To” book), one of the most useful tools exclusive to novelists that screenwriters are not allowed to use in scripts. The novel begins with the scene that starts on page two of the screenplay. It draws you into Jessie’s dilemma in a way the script simply cannot. She may be in the same predicament, but we get to spend a lot more time with Jessie, getting to know how she feels about life, her vulnerability, and her singleness. The interior monologue shares some of the information from the voice-over where Jessie is fantasizing about the life she wishes she had. Her journal habit, her hair color (and lack of blonde hair), what she sees as her ideal life. We find out she’s responsible with her job, is capable of taking care of herself, and how she feels about her boss. Even her boss’s character is set up here. All of this is revealed in the next part of the script, but in the novel this information comes out in the middle of Jessie’s crisis to reveal more about her character and life. The inner battle between her romantic optimism and her realistic cynicism shines through as well. The novel also takes a bit more time to describe the setting and the weather.

The interior monologue has a voice. It closely matches the style of Jessie’s voice from the script’s dialogue but is infused with additional humor and an openness you can’t have in a script without access to Jessie’s private thoughts.

Look at the segment of the script again where Jessie hopes the guy in the sports car will stop to help her. Then read over the novel version for that sequence. Notice the difference. Many of Jessie’s thoughts are shared during the part where she hopes the guy in the convertible will stop. We get to peek into what she’s thinking and feeling while anxiously waiting to see if he’ll help her. In reality, that scene on film would take just a few seconds, even if the director chooses to follow the slo-mo, brunette hair-blowing-in-the-wind dramatics. The novel allows us to pause and hear what flies through her mind in that moment, getting caught up in all her hopes and dreams of rescue. The script version is no less devastating to the character as she’s pelted with muddy water, yet the thoughts we get to read with Jessie in the novel are so enjoyable, so character revealing. We may even feel more for her in this moment because we got to stop and take the time to do so. Interior monologue replaces the visual of the muddy water. In book form, saying she was splattered with water does nothing because we can’t see her reaction to it, as an actress would depict it. So instead we have to go inside her head. The hope in film is that a cute and talented actress will garner some great empathy as well.

After the guy in the convertible does not stop and she decides to change her own tire, there is a sequence of her interior thought life about being single. It economically gives us an idea of what this character and story are about, what causes her pain, and she plainly states that she hates being alone. None of this exists in the screenplay, even though viewers are likely to get the same message watching an actress. Those internal thoughts voice the intention of the story of the screenplay, yet the script cannot be nearly that direct. However, notice how both the manuscript and the screenplay are moved forward with action.

The novel references the silhouette matching the man who was in her room after her nightmare. This matches the script without going into what her nightmare was about yet. It sets up that she saw this same, mysterious figure before.

This sample shows you the same sequence. It’s the same dramatic purpose. However, we traveled different writing roads to get there.

This scene is also an example of a change to the scene order (structure), as well as the challenge novelists face dealing with voice-over. This is especially true in this case where the voice-over does not match the visuals; the character is lying to herself about her reality.

We deal with all of those special challenges in translating a script into a novel in our book. This has been one sample, but we have many different samples in our new book, Novelizations: How to Adapt Scripts Into Novels.

To purchase a copy, click either on the paperback link or the kindle link below:

Novelizations – How to Adapt Scripts Into Novels: A Writing Guide for Screenwriters and Authors (Paperback)

Novelizations – How to Adapt Scripts Into Novels: A Writing Guide for Screenwriters and Authors (Kindle Version) 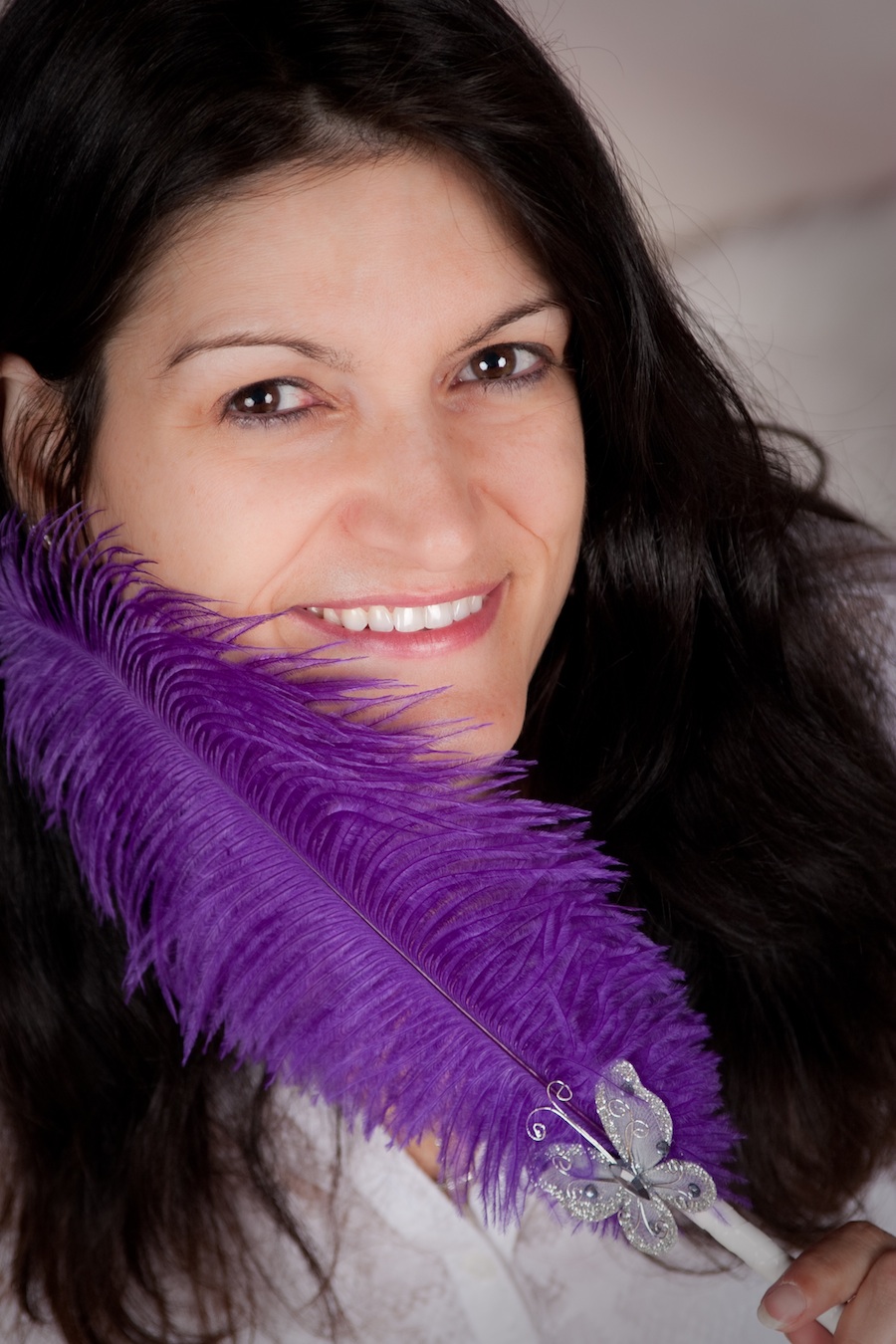 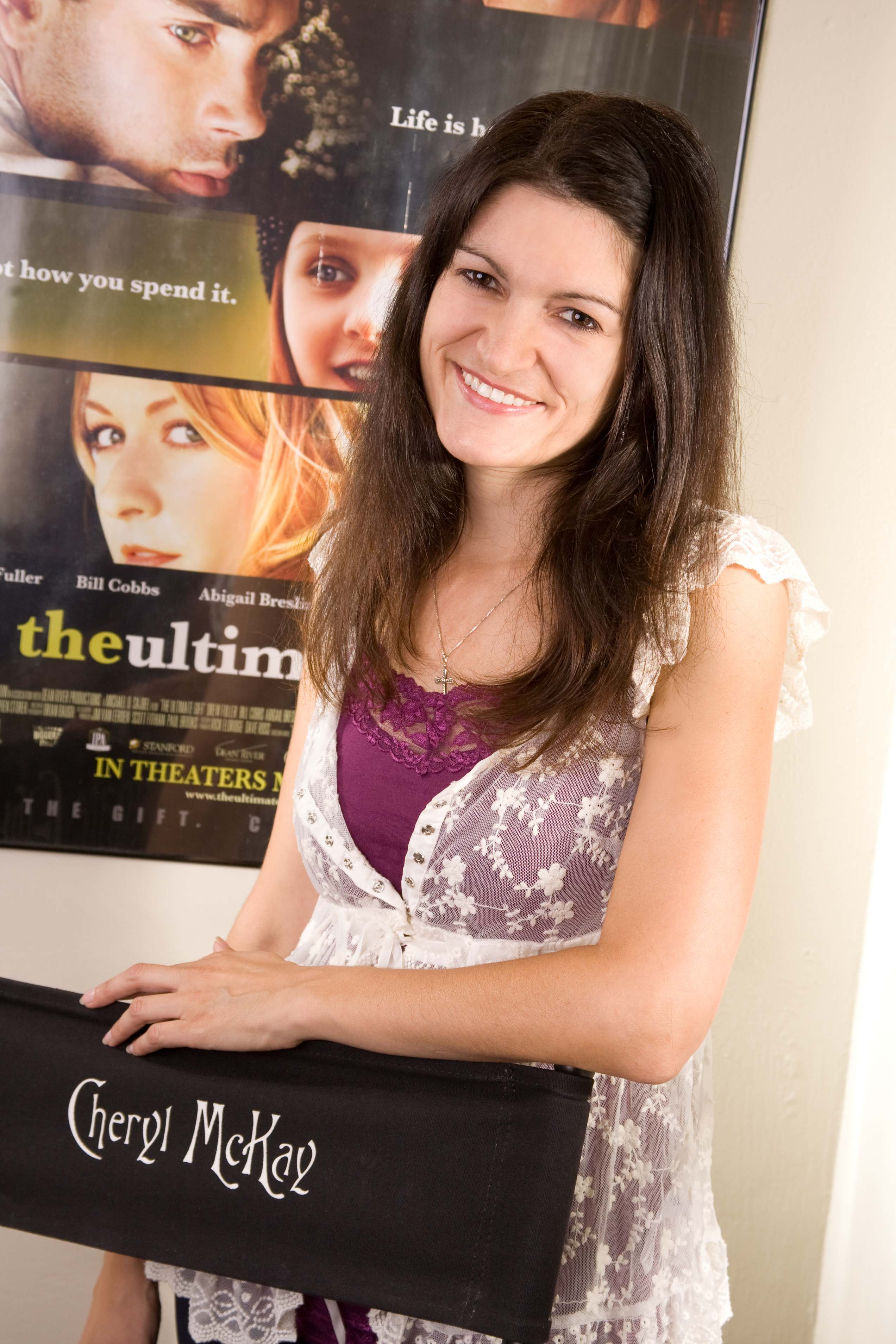